Sissy Must Be Punished 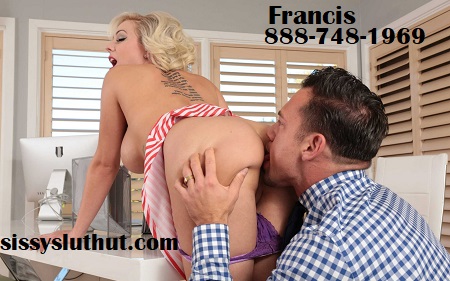 I had a sissy stop by today. He told me he had just gotten married and he wanted to be faithful to his new wife. I laughed loudly. I told that sweet sissy that while admirable, he would always be my little sissy and I would always be his mistress. He tried to argue but I quickly put him in his sissy place. I ordered him to get on all fours and to remain there until I returned. I reminded him that if he did not do as I obey, I would be giving that new wife a call and sending her some of my prize picture of her sissy husband. He hung his head as he sat on all fours in the floor in my office. I left him there to think about what he had done. I contemplated his punishment and returned. I told him I thought he had forgotten key parts of his sissy training. He was my tongue slave now to do with as I please. I informed him that we would need to increase our sessions to once a week until he was compliant again. If he did not show up, his new wife would be getting a surprise. He agreed. I told him for his disobedience he would be punished. I had him move his head towards the ground with that little ass up in the air. He was not worthy of a skin paddling so I paddled his ass through his pants hard. Making him thank me after each smack. He did as told like the good boy he was going to be. I did want to congratulate him on his marriage and give him a present. So, I climbed up on my desk and let him lick my sweet little ass with his tongue and finger my juicy pussy until the cum ran down my legs onto the desk. After cleaning up the desk puddle with his tongue, I told him what a good sissy he was and that I would see him next Tuesday. He smiled and left with the outline of his hard cock showing through his pants.