He Made Me Submit

Directly disobeying me will result in forced sissy training every single time! When I told Sissy Sam to go to work wearing panties under his suit everyday I meant it! Random inspections will be done, not that I told him first. But I needed to see, and when I got to his office he sputtered and tried to be angry. But I would not expose him if he let me see his undergarments for the day. Just as I suspected, cotton men’s briefs.  That required an allowance increase for me! Shame sissy shame, Pay piggy! I pulled a jeweled butt plug out and told him to bend over and gave very little lube and pushed it inside his little ass. It was tight and now he had to wear it all day! I bet his employees thought he was constipated. I giggled as he came over for a session. I had promised that he just might let him fondle my perky breast and play with my pussy. But instead there was a billowy pink sissy uniform and a brand spanking new cock cage. I had a list of chores for sexy sissy Sam once he was dressed. So pretty in his new cage and butt plug don’t you think? First we painted my toenails and gave me a leg rub, on his knees of course! And next we watched some sissy porn so I could watch that cage get tighter on his clitty. Oh how it swelled and leaked! But I still had some sissy maid chores, like scrubbing the floor with that ass in the air, so he could get used to exposing that tight sissy ass! My sissy would obey me, and at the same time learn the basic steps to become fucked and go through forced feminization until he metamorphosed into a full flagged sissy whore! 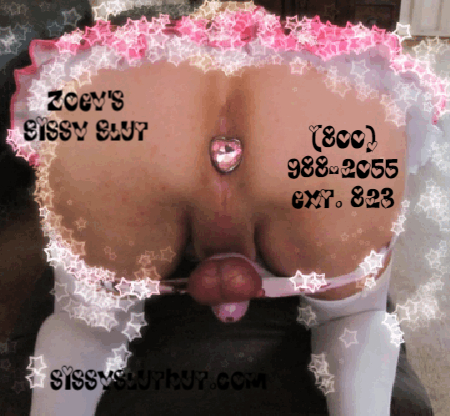